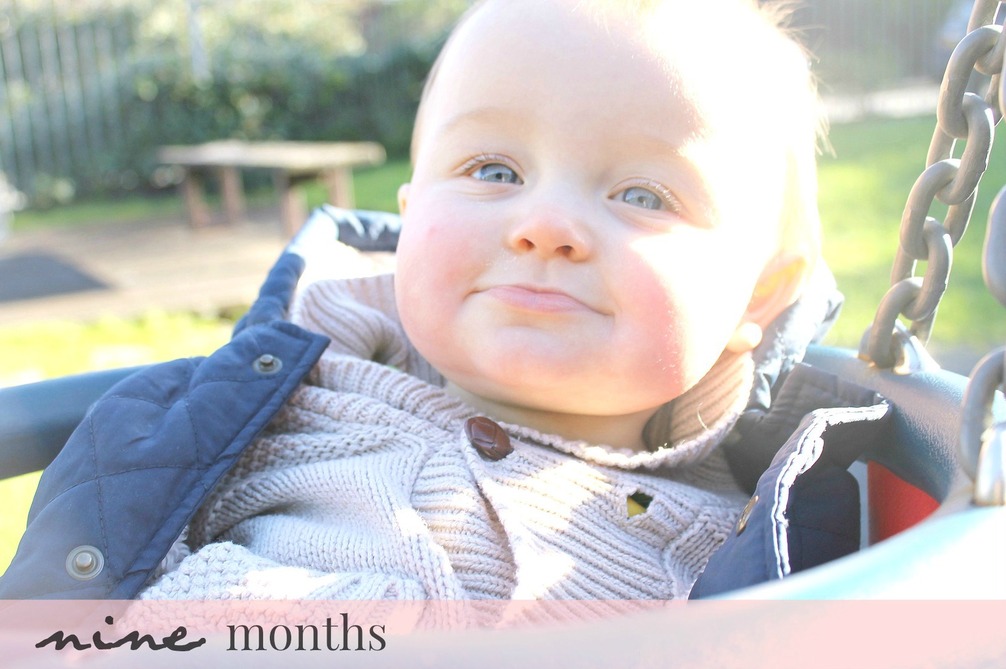 Gosh, time has flown! I remember how the first three months took so long to shift, but now we aren’t counting in weeks, the months seem to be rushing past. Little boy is looking more grown

up every day and is quickly filling out and growing heavier! His weight gain has rocketed in the last month, putting on even more than he was expected to, which is a huge relief to me. Now he is on solids, I always worry how much to feed him, but it’s so nice to see he’s getting enough – and was advised that he will probably lose any excess weight once he starts moving around!

In terms of movement, he prefers to be sat up or pushing himself along on his belly, not quite having the strength yet to push up on his knees to crawl. We’ve had some lovely sunny days of recent, which has been a wonderful break from the wet and windy weather. It gave us the perfect opportunity to explore the bigger playgrounds and parks down by the river.

Oscar is always fascinated by the bigger children and loves to see other babies! He enjoys the swings most of all and we have also experimented with the slide. I can never get used to replying ‘nine months’ whenever I am asked Oscar’s age, I still see him as a new little baby! In the kitchen there have been a few battles waged. Teething makes it a little more difficult to feed Oscar as he often rejects the spoon and cries if it knocks his gums.

He is a little fidget too, he loves to be on the go so won’t sit still for long, unless he is enjoying a yoghurt! *insert appreciative gurgling noises* With his savoury meals, he has a game where he likes to clamp his lips closed and laughs whenever I put the bowl down in frustration. I then try to seize the moment and insert said food but he quickly closes his mouth again! He has a strong preference for sweet yoghurts and rice puddings, he would happily eat his weight in them!

Oscar’s speech is definitely evolving and now we have the ‘dadadadad’ sound, which I’m not sure is related to Mitch yet, but it’s fun to guess! This is often followed by “say mumumum”, to which he smiles and replies “ehhhhhh”. There is also the ‘a-didid’, which sounds remarkably like ‘I did it’. He still loves to sing when he plays with his toys, when he thinks we aren’t watching! If he catches us staring he stops immediately and stares back until we look away. I love all of his funny quirks and behaviours, they are so interesting to observe as I’m watching him evolve!

So sorry if I am behind on comments, I’ve been having a bit of a down spell lately and so have been keeping away from the rush of social media and just relaxing with a few games. I read all my replies and notifications though – thank you so much!! ♡ I can’t wait to show you a little room makeover I’ve been working on secretly. Do you enjoy spring cleaning?